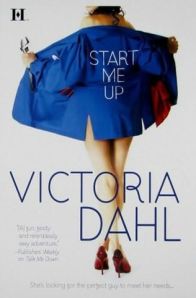 Lori Love is yearning for something more…
She’d always planned to get out of tiny Tumble Creek, Colorado, but when her late dad left her his beloved auto repair shop, Lori stayed. Now she needs some excitement in her life and, according to her best friend, some hot, no-strings-attached sex would be just the thing to get Lori’s engine purring.

Quinn Jennings has buildings on the brain—not love and romance. A serious architect, he’s delighted to discover that Lori is willing to skip dating protocol and head straight for the sheets. Using the Lori’s collection of steamy books as a guide, Quinn gets busy making all her wildest fantasies come true. Mind-blowing, meaningless sex is one thing, but then life in Tumble Creek takes a dangerous turn for Lori, and Quinn’s protective instincts kick in. Suddenly he cares. More than either of them ever expected…

Lori Love took over her father’s garage after his death and even though it messed up her professional ambitions and her dreams of traveling the world, she makes the best of it. She’s stubborn, independent and realistic. She is not a girly girl and is seen as one of the boys. In the small town of Tumble Creek she even has the rumored reputation of being a lesbian because nobody has ever seen her romantically involved with a man. When she’s looking for a man to have a sexual fling with, her best friend’s brother is the last one she’d think of, but he is available and when he volunteers very willingly she decides to go for it.

Quinn Jennings is the embodiment of perfection, at least in his parents’ eyes. He’s an accomplished architect who is a workaholic to say the least and scatter-brained is another description that fits him well. Nonetheless, he’s adorable and hot. Sometimes he’s the foot-in-mouth type of guy but his heart is definitely in the right place. When he finds out his sister’s best friend is looking for a volunteer to have a fling with, he doesn’t hesitate, he decides to take a chance and see where it leads them.

I loved Lori and Quinn and their story. They were lovely characters and their story was a very enjoyable read. There is a suspense plot intertwined through the romance again but it’s a very small plot and not the focus of the book. This is perfectly fine with me since it’s a contemporary and not a romantic suspense. However, the plot did present the perfect background for the emotional ending of the book and it also provided some insight in Lori’s character and motivations for the choices she has made in her life. What must be mentioned in this review is the resolution of the plot. As small as the plot was, the resolution was amazingly done. I was leaning towards the right person with my suspicions of who the “villain” would be but the motivation for this person’s actions was brilliantly found and totally took me by surprise.

START ME UP is a contemporary romance that was very much to my liking: not too complicated but with enough intensity to keep me captivated and even with the more staid Lori and Quinn (in comparison to Molly and Ben from TALK ME DOWN) the sexual tension leaped up from the pages. But it’s not only sex and fun. Both Quinn and Lori have emotional issues they have to deal with. For Quinn it’s his parents’ constant praise and approval of him while when at the same time they disapprove of his sister Molly because she chose her own way and doesn’t meet their expectations. For Lori it’s giving up her dreams, education, ambitions, and love life; in short giving up herself, in order to take care of her father and his needs and wishes when he becomes ill and later after his death.

I loved the amount of secondary characters, both the familiar and the new. Among the familiar of course Ben and Molly couldn’t be absent and I loved that they made a few appearances. The balance between romance, characters and hotness is perfectly done but I expected nothing less after TALK ME DOWN and THE WICKED WEST. Compared to other contemporary romance authors I’ve read, Victoria Dahl takes the love scenes quite towards the erotic side. Yes, they are explicit, but also tasteful and classy. Arousing yet never crossing the line to vulgarism. The use of the snippets from the erotica books Lori reads and Quinn’s “research” of the stories in order to find out what Lori liked, was another ingenious element in START ME UP and the verbal fights between Lori and Quinn, were delightful to read, not to mention the unbelievably hot make-up scenes they would have after them.

START ME UP is one of the books I read in July that I just flew through. From the moment I started reading I couldn’t stop. Between the numerous clever and laugh-out-loud one-liners and Lori and Quinn’s off the chart chemistry filled with sexual innuendo, there’s a story of dreams and independence. Sincere compassion and heartfelt and genuine love shine through the book. All brought to me by way of a writing style that is down to earth and delectable scenes that made me fly effortlessly through page after page until I reached the last one and felt crushed because there weren’t any left to enjoy.

Victoria Dahl’s writing is witty, hot and sensual. I haven’t sampled her historical writings yet but her contemporaries definitely are a hit with me and they are right up my alley: funny, sassy, fast-paced and excellently written. She is among the authors whom have made contemporary romance my favorite genre at the moment! START ME UP has become one of my favorite books and that’s not just because of the mention of Formula One and Amsterdam, or the snippets of Spanish or the fact that one of the walk-on secondary characters has my husband’s name.

I could go on and on with my praise of Victoria Dahl’s talent and maybe I’m starting to become repetitive with my worship but this is where it comes down to: Victoria Dahl is talented as hell and her Tumble Creek trilogy should be on every contemporary loving romance reader’s keeper shelf. Just don’t forget to keep a fan in arm’s reach. Oh and some tissues, because just when I thought I’d make it through a book with dry eyes and after all the hotness and fun, Victoria Dahl made me cry at the end with some beautiful, emotional scenes!

With START ME UP Victoria Dahl has written a contemporary romance novel as it is meant to be! Humorous, brazen, engaging and emotional yet uncomplicated.

Quotes:
Lori put her hands on the headboard.
The electric slide of his hand down the small of her back made her shiver. “Good girl.”
A jolt of lust swept through her belly, to her absolute mortification. You do not have daddy issues, she told her body in her best feminist voice. Her body responded by arching back in a blatant effort to please him. Hussy, the stern voice hissed, but hussy was no insult to her greedy body.

He stood there a moment longer, fantasizing once again of rescuing Lori Love. She’d turned out to be a damsel in distress after all, but not the innocent, helpless kind. No, she was a damsel of a different sort. The brave kind who fought and lied and did really dirty things to the knight in shining armor.

6 thoughts on “Start Me Up – Victoria Dahl”