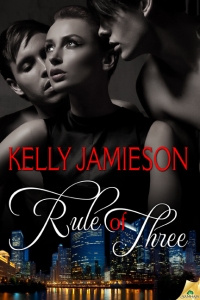 If you follow the rules, you miss all the fun…

Kassidy is a good girl who wants to be bad. Dag is a bad boy who is very, very good. And Chris? He likes to watch…

Always the good girl, Kassidy blossoms under the attentions of two loving men, but neither she nor Chris are expecting the ménage to take a quarter turn toward Dag…and his feelings for Chris. When it’s revealed that Dag’s attraction to Chris is one big reason he left town, a tangled mess of old hurts and new feelings might destroy friendship. Love. Might destroy everything.

Product Warnings:
This book contains a couple already in love, a couple falling in love and a couple in love who didn’t know it; also multiple scorching sex scenes including girl with boy, girl with two boys, boy with boy and two boys with girl…whew!

First line:
“In the shower?” Kassidy looped her arms around Chris’s neck and gave him a sexy look up through her eyelashes.

Memorable Scenes:
– Chris and Dag meeting again for the first time after 6 years and the introduction of Kassidy > my stomach tightened and chest hurt right alongside Dag’s and I was jealous of Kassidy
– the scene where Dag’s arrival for a night out, interrupts Chris and Kass at the verge of some serious sexy time on the couch> I loved the outcome where Chris and Kass continued in the bedroom with Dag only a few feet away, waiting for them.
– the nightclub scene > wow… Best scene of the book so far!!! Sizzling hot, thrilling, turning point in the book

Kassidy Langdon is the lucky heroine of RULLE OF THREE. She is intuitive, sensitive and a people person. Her heroes are her boyfriend Chris and his best friend Dag.

Chris is a golden boy who is sweet and kind but he also has a rebellious, ruthless and dirty streak. And he likes to take charge in the bedroom. This to me was a surprising side of him. He’s also stubborn and hides from talking about his feelings.

Dag is a rule-breaker. He is not one for a long-term commitment and he’s lonely despite his success because he can’t express his feelings to the one person he’s loved forever.

Chris and Dag are very different characters. Dag is the bad boy rebel against Chris’s rule-abiding golden boy. They have been friends since college. Best friends, until Dag moved away to the West coast for business 6 years ago. Actually Dag fled away because he was afraid of Chris’s reaction if he told him he was in love with him.

While writing this review I noticed I had very little review notes on Kassidy and a lot more on the men. This leads me to the conclusion that the author put more emphasis on the men, or was it that I was more focused on the men than on Kassidy?

I adore this style of ménage. Where the attraction between the couple and the third is not evident. And where the third has a secret crush on the hero. It builds up a tension arc that makes you anticipate every next page eagerly. It also predicts a bumpy ride. As I suspected nothing went smooth and easy towards a HEA and it turned out to be complicated and intense.

I love it when the author gives me a ménage that’s not cut-and-dry all happy-happy. When issues are raised, discussed and dealt with. The ménage in RULE OF THREE gave me exactly that. The m/m part of the story may not appeal to die-hard and seasoned m/m readers but for me it worked, even though I didn’t understand why Chris was the “catcher” in the crucial love scene instead of Dag, which would have made more sense to me.

The sex scenes were so hot they made my heart pound. A very big part of what I liked about them was the build up…this was done in a very sensual and sexy way. I also liked the alternating between full-out, detailed sex scenes and the behind the closed bedroom doors, fade-to -black scenes. It kept the balance between story and eroticism in place.

Kelly Jamieson’s writing style definitely appealed to me. It’s crisp and clean and gives the reader everything you need to know without info-dumps. It also gave me great showing, no telling! And something in her writing creates this anticipation, from the blurb of course I knew Dag wanted to be more to Chris than just a friend but it was also very palpable in the beginning of the story. Even without the blurb I would have guessed from the way Dag’s character was being portrayed.

One minor thing bothered me. There was a lot of chest tightening. The first few times they went unnoticed but after 4 times in just as many chapters I started to notice it to a point I needed to add it to my review notes.

She also did a great job with building up the tension and conveying the character’s feelings to the reader. There were parts I read with abated breath, waiting for the tension to break. Little, almost casually thrown in remarks gave me glimpses of interesting back-stories, back-stories I couldn’t wait to get the full 411 on! With every chapter more information about the characters is revealed, giving me a slow, intense characterization interlaced with the fluent, fast-paced story surrounding it.

Around 35% it felt like the tension broke a little and fizzled down… The sex scene started to overpower the emotional intensity and it felt like the emotional struggle Kassidy was having was brushed over. Also once they start having sex it’s like the premise of Dag’s intense feelings towards Chris (the heavy m/m vibe I got at the beginning of the book) is watered down and he seems completely focused on Cassidy. This didn’t stroke with the beginning.

However this only lasted for a few chapters. Around the halfway mark the intensity grew stronger again and the conflict thrown in also contributed to this. From this point on I was once again drawn in and the strong ending made up for a lot.

RULE OF THREE is a great story in the vast field of ménages out there. I can add Kelly Jameson to the select group of authors that writes m/m/f ménages that work for me. I have a few other Jamieson books on my TBR and I can’t wait to get to them.

“I’m betting you’re a chicken or fish kind of girl,” Dag said, watching her. “Or maybe salad.”
She reached for her glass of wine with a graceful motion of her hand and flashed him a look. A faintly hostile look. “Chicken or fish kind of girl?”
He tipped his head to one side. “Don’t tell me you want beef too?”
She gave him a slow smile that sent heat sliding right through him. “I believe I will have a steak tonight,” she said softly.
“Attagirl,” he replied, holding her gaze. Another flash of heat jolted him.
Huh. Something flowed between them, something warm and magnetic, something that felt a lot like…attraction.

Dag watched Chris’s long, tanned fingers caressing Kassidy’s hair, slowly rubbing a strand then dragging his fingers down the length of it. Something clenched inside him and he felt like he couldn’t take his eyes off the mesmerizing motion.

But spending time with Chris’s girlfriend without Chris shouldn’t be a problem. Really. Why would it?
Just that sexual tension underlying everything they said, every glance they shared, and never mind if he actually were to touch her. Then he wanted to, just to see if actual sparks would fly. Bad. Bad idea.

He’d heard everything, every goddamn moan and pant and thrust. They might have thought they were being quiet, but you couldn’t f#ck up against a door without making noise.

Complex emotions rose and fell in him, fragments of thoughts spun away even as he tried to marshal them together into coherency. But his balls were on fire, his dick so hard it hurt, and all those hormones pounding through him were destroying his ability to resist temptation.

Life was so strange. When you could be jealous of the things someone else had at the same time they were jealous of what you had. Why couldn’t everyone just be grateful for who they were and what they had without comparing it to others?