Ben and Joe are stretching their legs after several days spent down in Air Force isolation. A cold beer and the Mariners game was the plan. But when a hot woman makes it clear she doesn’t mind sharing, these two friends can’t seem to resist the chance to bunker down and get a little wild.

First line:
Ben sighed and took a long pull from his beer, holding the bottle up afterward as if to examine it. 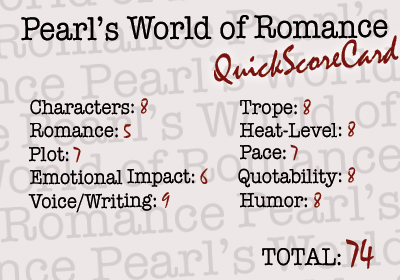 BUNKER DOWN is the story of a ménage quickie between two Air Force men: Ben and Joe and a woman they meet at a bar, Sierra. It’s a quick read, fast-paced and comes right down to business from the start.

Basically the story is one sex scene. But hey, after all the series is called Dirty Bits. This was a well-written, hot, quick dirty bit.

She wanted to argue, to beg them to let it go on, let the worshiping of her body continue until there was nothing left of her but a puddle of need. But she couldn’t form a coherent sentence so she just turned her face into the back cushions of the couch and moaned.

Getting head was like a box of chocolates, to Ben’s way of thinking. You never knew what you were gonna get. Would she use her teeth? Take him deep, swallowing as much as she could? Or tease and twist him around her little finger until he was all but whimpering and begging for release? The anticipation, just thinking of her hot mouth, all that suction, wrapped around him made him clench his fist at his side, tighten the other hand in her hair. She only smiled, as if she knew that her long perusal of his c#ck was driving him crazy.